Spoiler alert: Savannah has no skyscrapers. Most of the city’s tallest buildings max out at around 15 stories; a loose definition of “skyscraper” is anything more than 40. But at one historic downtown property near Monterey Square, there are steel flange beams — those stalwart building blocks used for New York’s Empire State Building, the Chrysler Building and the China World Trade Center in Beijing. That’s because, though it’s only three stories tall, the home features custom glass bifold doors. They weigh about 400 pounds each, and allow the entire property to open up from the inside.

The house dates back to 1913, but the interior courtyard was added during the 1970s, when building codes were glaringly lax. “It was structurally precarious,” the homeowner says. The courtyard’s windows also opened only partially, and the homeowners wanted a completely indoor-outdoor living space. Enter those folding doors.

“We needed literal skyscraper beams to hold the weight of them. The construction crew had scaffolding and a truck with a roller conveyor, but how they got them all the way up there? I have no clue.” It was, in a word, “magic,” says the homeowner.

“Teamwork” might actually be the more fitting term. The project called for close collaboration among general contractor David Bloomquist, architect Christian Sottile, and interior designers Sonchia Jilek, Sara Hartley and Carolyn Hultman of Hultman Interiors. Serendipitously, Sottile grew up just two doors down from the home, and Jilek remembers admiring it during her days as a graduate student in Savannah.

“It’s such a unique structure, and I
was always curious about the interior,” Jilek says.

The four-bedroom home features other impressive specs, like nine fireplaces, a rooftop deck and a cavernous front staircase. At the rear wall of the courtyard, next to a babbling fountain, a palm tree ascends three full stories, its fronds just clearing the roof deck.

After intense structural rehab — “We took it down to the sticks and built it back up,” Jilek says, noting the palm tree was the only thing preserved — Hultman Interiors stepped in to make sure the interior design and decor was as exceptionally executed as all the rest. That meant refinishing the home’s original, hand-painted faux marble mantels, blanketing the parlor in sumptuous Jim Thompson fabric and recreating period-
appropriate columns for the entry. In
two upstairs guest rooms, each equipped with a fireplace, the team cut ever so slightly into the walls to create a nook for smartly dressed beds; it’s equal parts architectural element and practical solution to forge a clear footpath around each room. The traditional feel of the front of the house quickly progresses into a modern aesthetic, driven largely by the steel-and-glass courtyard.

“As you go through the space, the rear, which is the newer part, lends itself to something more playful and modern,” Jilek says, noting details like a floating staircase that heads up to the master bedroom and flat-front, custom-glazed cabinets in the kitchen. “Still, when
you open up those doors, everything marries together.”

“The homeowners were game for using fun colors and fabrics, and I really appreciated them wanting to use local artwork,” Jilek says, pointing out traditional pieces from the homeowners’ initial collection alongside new, contemporary works from Savannah artists like Betsy Cain, Stephanie Howard, Jack Leigh and Katherine Sandoz.

Taken together, it’s hard to describe the home’s envelope-pushing aesthetic in a word or two, but there was a guiding maxim, says Sara Hartley, also of Hultman Interiors. “‘Be outside the box.’”

Lighting: Urban Electric and Circa Lighting 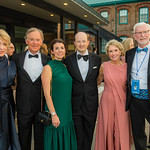