In conversation with artist and change maker Jerome Meadows.

Jerome Meadows sits across from me at a local coffee shop we both frequent, filling me in on his life as a full-time artist with his signature zen and a warm smile. Meadows is busy, with a substantial list of large-scale public art projects on his docket — the type of work that brought him to Savannah more than twenty years ago. Meadows is also well known for his smaller collage and assemblage work, as well as his poetry-meets-visual performances. He’s an artist who believes in the power of art making both for personal exploration and as a driver of culture.

I first met Meadows several years ago when I was a teaching artist in DEEP’s Block-by-Block program. We wanted to give young authors avenues to express their stories and poems through visual means. For several weeks that year, we met up in Meadows’ Waters Avenue MeadowLark Studio with textured paper, glue, baubles, objects each student brought from home and piles of magazines, and he taught us the power and possibilities of assembling objects to tell a story.

After all, telling powerful stories is what Meadows does best. In the cavernous and sprawling workshop in the back of MeadowLark Studio, a once-ice house where he fabricates his large works, sit two new commissioned projects ready to go out — bronze and cypress maneuvered into elegant curves that don’t seem quite possible. In one, for a civil rights memorial in Columbia, South Carolina, profiles of faces have been cut down the middle of a huge sheet of bronze and twisted ever-so-slightly, so that the profiles are imbued with the depth and dimension of living people. The forms look like they’re speaking to each other.

While much of his work happens in Savannah, some of the larger public art requires travel. Meadows has recently been spending time in Chattanooga, Tennessee, beginning a commission he was awarded last year after being selected from 45 prestigious applicants around the globe. This sprawling public memorial tells the story of Ed Johnson, a young African-American man who was lynched by an angry mob in 1906.

The story of Ed Johnson is not only a sadly familiar one, it’s also a story of historical firsts, another reason Meadows felt drawn to the project. Johnson had been swiftly convicted of raping a white woman — with questionable evidence and an all-white jury — and sentenced to death. But because of the appeal efforts of two African-American attorneys, Noah Parden and Styles Hutchins, who argued that Johnson had not been afforded his Constitutional rights during the trial, the United States Supreme Court issued a stay of execution — the first time an African American was awarded a stay by the U.S. Supreme Court, and the first time the Court got involved in a state criminal case to halt an execution. That same day, a mob broke into the jail where Johnson was being held, dragged him to the Walnut Street Bridge, and killed him. After Johnson’s murder, the Supreme Court held its first and only criminal trial, finding the sheriff and several other people involved in the case guilty of contempt of court for their part in allowing the mob to take Johnson from the jailhouse. Almost one hundred years later, the charges against Johnson were dismissed.

It’s stories like these — and the act of bringing them to light — that inspire Meadows, both personally and artistically. He explains that during a time in which he questioned what came next on his path as an artist (what he calls a long walk in the desert), it dawned on Meadows that public art — like the Ed Johnson memorial in Chattanooga or the African Burying Ground in Portsmouth, New Hampshire, which he completed in 2015 — was his way to contribute to culture in a large-scale way.

I asked Meadows about the life he’s made here in Savannah, the cultural implications of public art and what it’s like to live and work in an ice house. 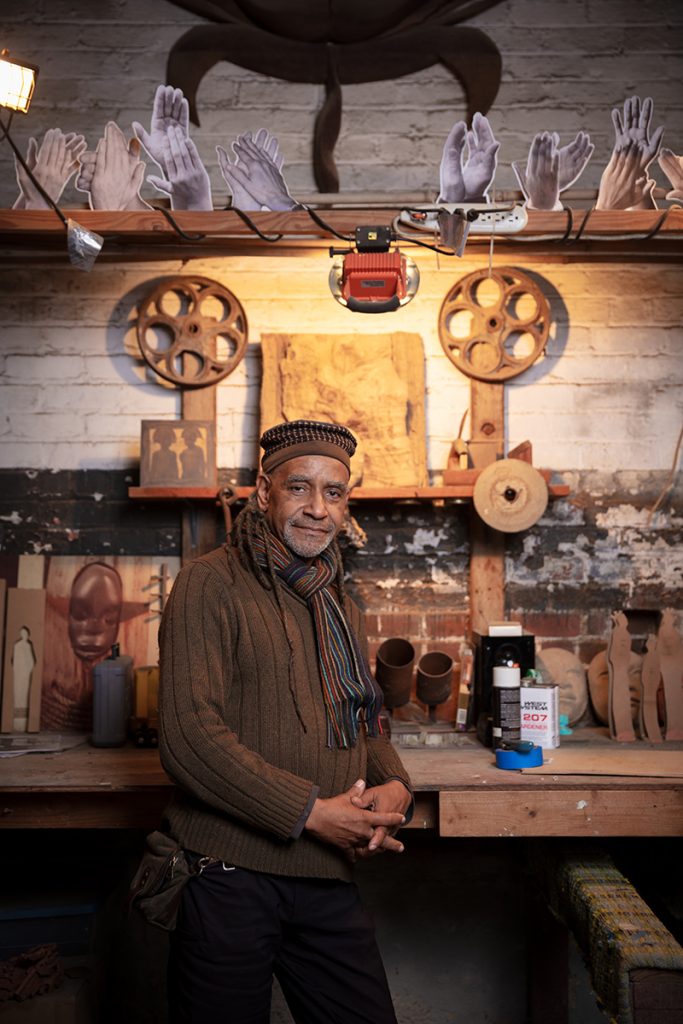 Alexis Orgera: How do you see your artwork as part of a cultural conversation around change-making?

Jerome Meadows: The importance of culture to a society cannot be overstated. We know what we know about our existence on this planet, from the very beginning, by way of our wealth of cultural offerings, including artwork, over all these centuries. So it is safe to say that culture, in its wide array of forms, is an intrinsic part of how we see ourselves and how we are inclined, if not compelled, to present ourselves to one another.

AO: At your recent retrospective at Trax Gallery in Lake City, South Carolina — where the yearly ArtFields exhibition and competition has transformed a sleepy Southern town into an arts mecca — smaller assemblage, collage and sculptural works spanning your career were recently on display. How does making public art differ from your smaller art pieces?

JM: They differ in very significant ways, although they emanate from the same compulsion. The public artworks, as the word implies, are specifically designed to function in relationship to the collective needs and perceptions of a community of people. These works have tended to be about memorializing, celebrating and bringing to the forefront individuals, locations and events of major value to the active identity of that community. On the other hand, the smaller works tend to be of a more personal nature with respect to my own sense of sculptural form and artistic narrative.

AO: So, does public art say something about what a place cares about, or how a place reckons with its history?

JM: Yes, and this can be seen in the current push back against monuments to the Confederacy spread across the South and elsewhere. By definition, these were forms emanating from a desire to put forth a collective cultural identity, albeit within a very specific communal group. However, to the extent that that infringes upon the dignity of others is where the purpose of culture at large comes into play — and bolsters my purpose of reviving other voices as well.

AO: Speaking of celebrating and reviving voices of the community, you recently orchestrated a local performance of your popular Blank Page Poetry event called “Waters Avenue: Voices Along the Corridor.” How does Blank Page Poetry feed you as an artist?

JM: Blank Page Poetry, which I conceived of and first launched here in Savannah, has become another powerful way in which I can do what I’ve been doing with my large-scale public art projects. These performances, involving poetic recitals, dance segments, customized sounds and digital projections, are always very site-specific. That is to say, that the theme of the performance is derived from issues of importance to the community, and all of the performers are drawn from that same community. In this way, Blank Page Poetry combines the broader identity objective of public art with a range of narrative viewpoints as provided by the performers.

AO: You’ve taught both art and poetry to young people in Savannah for many years, and you’re currently going into Chattanooga schools to both share Ed Johnson’s story and create a platform by which students can respond poetically. Why is this important?

JM: I think it’s important to invite audiences, especially young ones, to consider what a story means. Going into schools with a story like Ed Johnson’s brings history to life. The intention is that pieces of student responses will make their way into the memorial.

AO: Tell me a little bit about your MeadowLark Studio space here in Savannah.

JM: What is now MeadowLark Studio was built in 1901 as an ice house, and it is proof positive of what can happen when you follow your passion. I knew my building was awaiting me somewhere in the world, but it took some time for circumstances to bring me as an artist to Savannah and to find the ice house that would become mine. I was originally concerned about getting a mortgage through standard sources as a self-employed artist, but circumstances with the seller made that a non-issue; and 22 years later I own the building outright.

AO: So, MeadowLark is your live-and-work space. How does that work for you?

JM: This ice house has provided — with its 7,000 square feet — more than sufficient space to work in, live in and establish an art gallery in. However, while living and working in the same building is a dream of the artist as “cave dweller,” it does have its limitations, one of which is a sense of isolation. I tend to counter that by getting out of the building on a regular basis. I almost always eat breakfast out, and I take time toward the end of the day to sit outside over coffee, doing some people watching and keeping up with my journal. As a result, a number of the people within my rather small social circle are the wait staff, managers and owners at these various establishments around Savannah.

AO: What did it take for you to commit to being a full-time artist?

JM: My mantra from early on in this journey has been this: Living, breathing, thinking, doing art all the time. I sensed that being an artist held the promise of a very engaged and fulfilling way of living. Inspired by other artists that I knew, or knew of, my various professors, and my own stubbornness, I decided not to take no for an answer. The other mantra that has served me well is that money follows passion. If you’ve given yourself to what drives you in service, the means will follow suit.